The Very Smart (Bilingual) New York Cat Goes to Hollywood With a Little Help From Her (Best) Friends.

New York- Best Friends, the largest animal rescue organization in the country, and home to National Geographic’s hit television series, Dogtown, has decided to adopt a cat that lives in New York, two thousand miles from their headquarters in Utah, but what a cat she is! She can make phone calls, eats her dinner with chopsticks and even plays the harmonica. She also has a tendency to create havoc and mischief with her unusual behavior. This very special kitty will be introduce to the West Coast on November 13th, at the Hollywood Palladium, during the 15th edition of Best Friends’ star-studded fundraising extravaganza, Lint Roller Party.

Forewarned of her antics, Hollywood Palladium’s management has insisted to the organizers that she be kept inside a bag. But we are sure that she won’t stay confined for long. Not when the eight hundred guests at this fabulous event peek into their Goodie Bags and find the smiling, innocent face of the “tuxedo” kitty, looking back at them from the cover of the gorgeously illustrated, hardcover book featuring her adventures. The book is appropriately titled, A Very Smart Cat/Una gata muy inteligente. According to her “biographer” Mario Picayo (who will be flying from New York to attend the event) the adventures depicted in the book, were inspired by the (mis)behavior of one of his daughter’s adopted felines.

“It is all about an extremely smart cat that will not leave the dining room table, and the owner that has to deal with her antics. Nothing can be left on the table since the smart cat will use it for her own amusement, or needs. She cuts her favorite pictures from magazines, drinks coffee, changes the TV channel, and makes long distance calls to her friends. It is, of course, an exaggeration of the real cat’s behavior, but people are writing to us and sending pictures of some amazing things that their cats can do, and it is quite amusing how clever real cats can be.”

The book, released this past September 21st, has been quite a hit in New York, where Mario has been reading at bookstores, and especially at animal shelters and sanctuaries during FREE ADOPTION days and weekends. Fifty percent of the proceeds are always donated to the host organization. For the upcoming year the goal is to participate in 109 events to promote adoption of cats and dogs, “109 in 2009”.
Even though the story is a funny romp, the book contains a full page addressing the importance of adopting cats, of neutering and spaying, and of taking good care of this furry ally and friend that has kept us company for over ten thousand years.
“We are very happy to contribute, in our small way to Best Friends’ work and to the work of other organizations that do so much for so many animals in need” Picayo expressed.

For Best Friends the book is especially appropriate since the cat in the story is a rescued feline, and because the owner, Cristina, the author’s daughter, has been involved with Best Friends since 2001. As a matter of fact, Best Friends is partially responsible for the Picayo’s ownership of the Very Smart Cat.

Back in 2001, Cristina visited Best Friends when they attended the How To Start An Animal Sanctuary Workshop. She ended up coming home with lots of ideas and with a dog named Inka. She also fell in love with Best Friends’ mission and began adopting animals and promoting adoption with local rescues. Cristina lives with her husband Andrés, and their two children on a 300 acre hay farm in upstate New York, that they share with their extended family: 7 dogs, 12 cats, 6 horses, 2 miniature donkeys, 10 sheep, 4 goats, 5 rabbits, 3 pot bellied pigs, 12 chickens, 10 guinea fowl, and 1 chinchilla. Her parents, “only” have 16 rescued cats and 2 dogs.

A Very Smart Cat is written in English and Spanish. Alicia Castaneda, Managing Editor of Campanita Books adds that “bookstores are realizing what an asset it is to have children books in multiple languages, and are beginning to display them prominently. The response to Mario’s book has been phenomenal”.

This kitty’s adventures will make a great Christmas gift, and a percentage of the proceeds from all sales will go to animal welfare organizations. A Very Smart Cat is available at your favorite bookstore, including Barnes & Noble, and at many virtual booksellers like Amazon.com. It can also be purchased directly from the publisher.

This is Mario Picayo’s second children’s book. His first title, A Caribbean Journey from A to Y (Read and Discover What Happened to the Z) has sold over 10,000 copies since its release in October 2007. 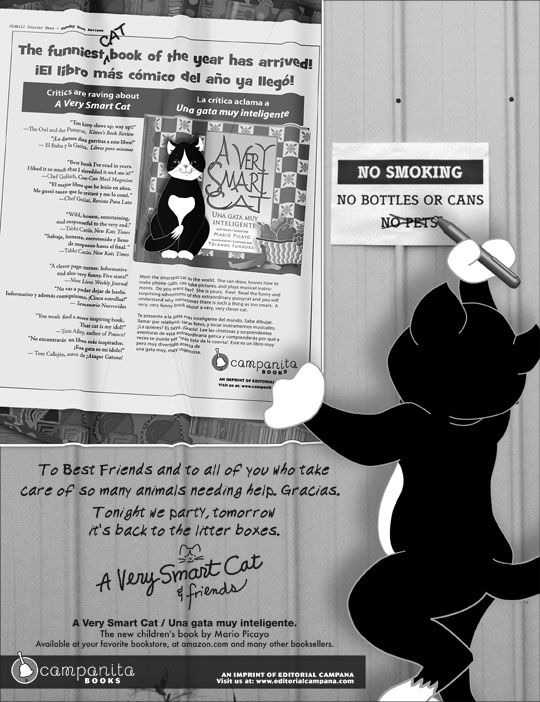 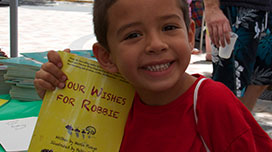