Best Selling Caribbean Children’s Book author to visit Barbados for re-opening of National Library will talk to the public and present three copies of his book to the National Library, including a Special Edition courtesy of the First Lady of the U.S. Virgin Islands.

January 29th 2009. St John’s, Antigua- New York resident, Caribbean author Mario Picayo presented his children’s book A Caribbean Journey From A to Y (Read and Discover What Happened to the Z) during a brief visit to the island today. The author spoke to students at Island Academy, and at Potters Primary School. He also presented signed copies of A Caribbean Journey to Ms. Dorothea Nelson, Chief Librarian at the Antigua Public Library, and to the Ministry of Education. Several copies of A Caribbean Journey have been purchased by the Library and will be available to all patrons. Mr. Picayo made a quick stop at Best of Books, the only bookstore in Antigua where A Caribbean Journey can be purchased. One of the two copies presented to the library is a Special Edition made exclusively for the United States Virgin Islands. The copy arrives courtesy of the First Lady of the US Virgin Islands, Cecile de Jongh, as a gift to the children of Antigua. Mrs. de Jongh is a well-known literacy advocate. Another copy will be presented to Barbados National Library tomorrow.

On to Barbados. On Friday at 10 AM as part of the events celebrating the re-opening of Barbados National Library, Mario will present three signed copies of the popular book to the library, including the Special Virgin Islands Edition. As in Antigua, several copies of A Caribbean Journey have been purchased by the Library and will be available to all patrons at its many branches.

A Caribbean Journey from A to Y has been a commercial and critical success. Dominican writer Silvio Torres-Saillant (An intellectual history of the Caribbean) wrote: “The images and the words combine to disrupt many of the visual and discursive stereotypes that often recur in representations of the Caribbean. I can think of no better book for children to begin the lifelong adventure of knowing the Caribbean”. Glen “Kwabena” Davis, Director of the US Virgin Islands Education Department’s Culture Division, said “Mario Picayo’s A Caribbean Journey from A to Y is a book sure to motivate kids to read it over and over. The illustrations and the artistic appeal of the book make it really stand out among other children’s books.”

Published at the end of 2007, The 64 page, hardcover, fully illustrated book has gather steam with each passing month, selling over 10,000 copies in December 2008 and becoming an Americas Award Commended Title.

The back cover describes it as a “fun and educational journey through the Caribbean Islands, one letter at a time! From Aruba to Trinidad and from avocado to yam, the reader learns the names of many of the islands, plus fascinating facts about them. A Caribbean astronaut? From which island? An island with over 300 rivers? Seals in our tropical waters? And wait until you see what happened to the Z”.

Mr. Picayo is making his visit to Antigua and Barbados onboard the Norwegian Gem as part of a multi-island presentation tour. “He wants to introduce the book personally to each Caribbean island where it is sold, or will be sold”, according to McKinley Matteson, Assistant Manager at Campanita Books, publisher of A Caribbean Journey. On Wednesday the author stopped at his old home, St.Thomas, U.S. Virgin Islands to pick the signed copies from the First Lady herself.

If you want to meet the author, and take a first look at the Caribbean Journey from A to Y (Read and Discover What Happened to the Z) visit Barbados National Library Service’s new Independence Square Headquarters tomorrow, Friday, at 12:30 PM. Mr. Picayo will read from the book and talk to the audience. 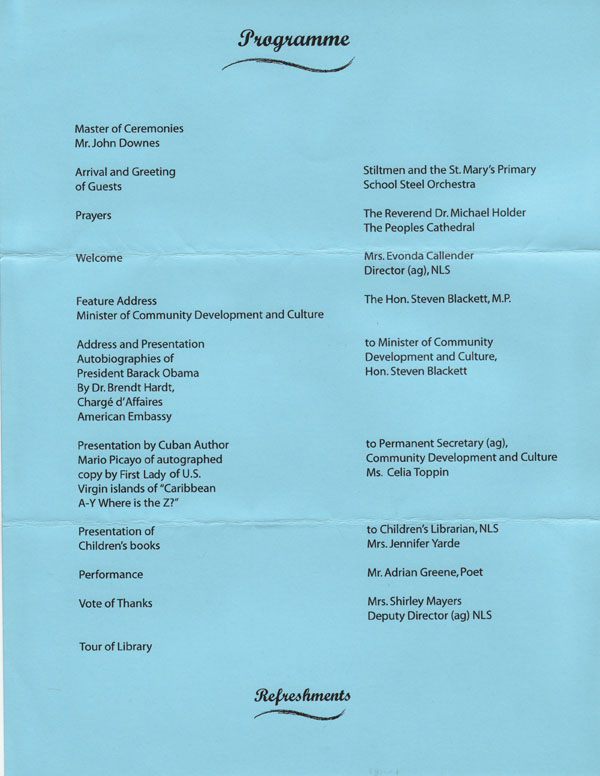